Twitter is an awesome tool: it makes relationship more intense and it is easy to use.

According to an Ipsos study, 2,3 million of people in France has an active Twitter account, and among them, only 19% have more than 50 followers. How can you be more influent and get more followers?

There are many technics that will help you to manage this tool. Let’s begin with these 7 tips:

To create the engagement (tweetback, retweets, favorite) you have to be reactive. You have to see Twitter as a conversation, you have to read your Twitter feeds like a dialogue instead of a promotional space.

Depending on how you have build your communication strategy, it can be interesting to consider Twitter as a way to be closer to your client. You can bring solutions in real-time to your clients interrogations. A satisfied client on Twitter will be more likely to positively tweet about your brand. Be careful not to transform Twitter into a customer service! As far as we are concerned, we prefer answer our customers questions on Twitter by sending them directly to our customer service staff. This way, we can use Twitter mainly to display contents.

How to be responsive on Twitter without being less productive ? How to answer to all the mentions of our name on Twitter ?

Hootsuite is a great tool to track your feeds. The free version enables you to manage 5 accounts from a unique or different networks: Twitter, Facebook, Linkedin, Google+, Foursquare. To be aware of who is talking about you on Twitter, you just need to add a feed or a block with your name mentions « @mention or mention ». You could track and respond then to all the tweets that involve your name. 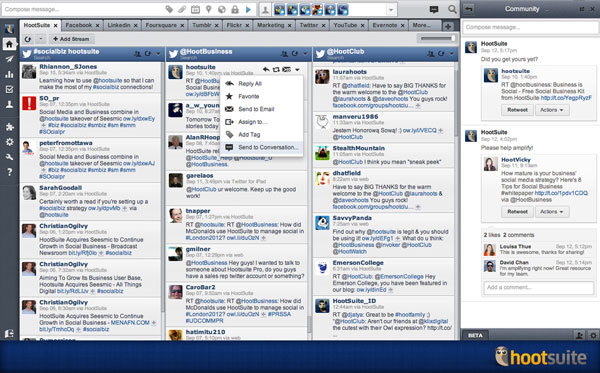 You can also try Tweetdeck which is a really interesting tool. Easy to use: you just have to add column to track your feeds, interactions, mentions, hashtags and schedule your tweets. You could also track your competitors feeds by adding their tag on a column.

Think twice before adding a person to your feeds. This one could spam you with his tweets. On the other hand, not to be considered as a spammer, be careful to produce valuable content.

To encourage people to follow you, you can begin by creating an attractive profil description that put in relief your passions.

As a curator you could join the group of « important people to follow on Twitter ». You have to show everyone that you are maintaining a watch on the web and that you are sharing the most fascinating and intelligent content with your followers.

The secret for being active all day long on Twitter: schedule your tweets. Buffer is the app I use for posting regularly on Twitter. The plus, with Buffer you can list your tweets and choose the right time to post. Unlike the programmation tool available on Twitter, you also can schedule posts with photos (that generates twice more of engagement!). On Chrome browser and on the mobile, the app is totally embeded and make it more easier to share an interesting article : you can add it directly on your Buffer list by clicking on the Buffer icon on your browser. If you manage many social networks, Buffer help you to share one article on multiple networks!

Studies reveal the perfect schedule to post on Twitter. According to our own analytics, the retweets are more important around 4pm and the click rate at noon. This is quite similar with the study of Dan Zarella (@Danzarella) and Hubspot published on Kissmetrics:

We also noticed an engagement rate much more higher the week-end (+17%), a good reason to schedule on Buffer your week-end tweets. 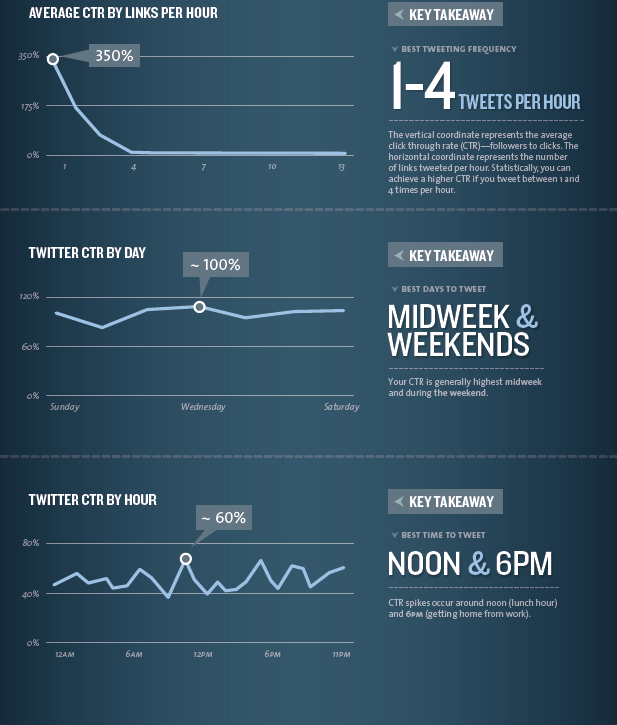 Are you familiar with Klout? This site was at the beginning a simple metric tool of social influence, it has recently evolved. It now makes it possible to schedule posts on social networks. Furthermore, it suggests some contents regarding the topics that matter to you.

It is always annoying to be approached with a commercial speech… Twitter can be the perfect tool to create a more personal relationship with the potential client and to be considered as an important contributor. To create this relationship, you can for example share one of his content, taking care of mentionning his name @mention. 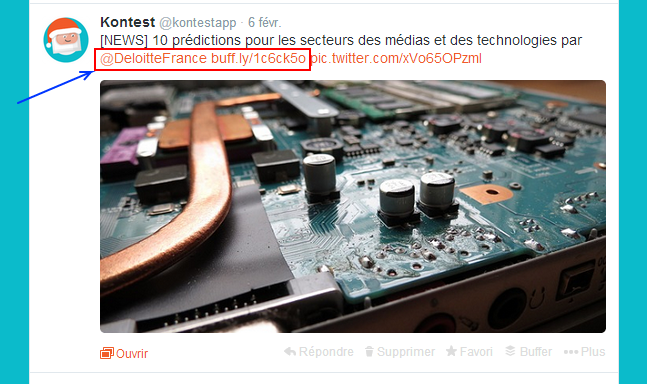 Instead of only retweet the name of the article, you can prove him that you have actually read it by quoting a part of the text. You can give your own opinion on this article and ask a question directly to the author of this article.

Brands can develop awareness on Twitter thanks to a strategic us of the platform. A brand that suffers from a lack of interest can show its funny side and thus be more likeable and visible.

How not to mention the pop singer account case @JamesBlunt. His community manager (it is hard to believe that James Blunt is hiding behind these posts) is criticized daily on Twitter. He could have chosen to ignore them. But on the contrary, he choose to answer with humor and self-mocking to all of these tweets. You can’t afford of being aggressive when you are a Community Manager, @JamesBlunt has understood it. This position gives him some credit on the twitosphere, and it for sure has made his number of followers rise! Here are some of my favorite tweets:

7 – Think strategy but act as an individual

You have to be two people on Twitter: an evangelist of his brand and a personal advisor. Of course, you have to adapt your speech to your target: clients, prospects, potential recruits… You have to look out the people that are the most engaged on your tweets to create a real relationship, maybe even set up an IRL meeting. 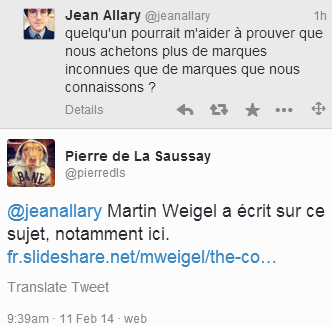 You can’t abuse of the automation which is depriving Twitter of its spontaneous native style. You don’t have to be affraid of being yourself and to show off your personality: 53% of Twitter active users write themselves their tweets (Ipsos). We remind you that people are following a person and not a robot !